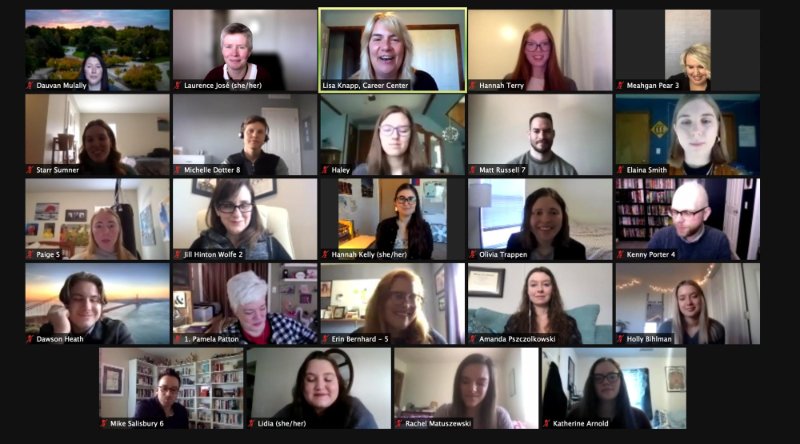 On Friday, April 2nd, 14 students, majoring in writing and/or minoring in Digital Studies, and 8 professionals participated in a virtual networking event. The main goal was to give students an opportunity to practice their networking skills and learn more about the field of writing. The event, organized by Writing faculty Laurence José and Dauvan Mulally alongside career advisor Lisa Knapp from the Career Center, allowed students to connect with professionals and gain a clearer understanding of where a degree in writing could take them. The professionals were from the following areas: freelancing, marketing, publishing, editing and writing, and content creation and development.

Even though the meeting was virtual without any face-to-face interactions, many students in attendance felt an air of nervousness as they logged on. Faced with successful writing professionals such as Meahgan Pear, Pam Patton, Erin Erno, Mike Salisbury, Michelle Dotter, Jill Wolfe, Matt Russell, and Kenny Porter, networking suddenly felt daunting. Perhaps even more so because it was online.

“I felt nervous and excited at the same time going into the event,” senior Writing Major and Digital Studies Minor, Elaina Smith stated, “I was worried I’d say something weird out of nerves, but I was also looking forward to being able to connect with some of these professionals!”

To prepare and put the students at ease, Lisa Knapp provided networking tips in a breakout room session at the beginning of the event.  After that, students were paired into groups of two in different breakout rooms where professionals could then file through on a timer. They then had ten minutes with each professional to ask questions, hear advice, and put their networking skills into action. As the event progressed, students felt much more comfortable and began to enjoy more their conversations with each of the professionals.

Seeing the variety of careers available to writing professionals was an eye-opener for many students. “I was amazed at how much more confident I felt as a writing major by the end of the event,” junior Writing Major, Jessica Barnard said. “My expectation was that I’d feel rocky but better about my networking skills, but I ended up thinking more about all the possibilities I have for a career in writing.”

Other students found comfort in the excitement and reassurance from each of the professionals: “Professors José and Mulally and Lisa Knapp worked hard to create an opportunity for all of us to meet with industry professionals, and at this capacity, I think events like this are unique to the Writing Department and their commitment to Writing Majors,” senior Writing Major and Digital Studies Minor Dawson Heath said. “All of the professionals expressed their excitement for us as soon-to-be graduates which was reassuring considering the pressures of graduating and finding a job amidst society trying to return to normalcy.”

While approaching graduation can be daunting, the Writing Major networking event left students feeling more confident about their career paths, and with a greater sense of connectedness with their fellow writers in the professional world.

“Hearing such a wide scope of professional writers discuss their starting points—which were mostly where we as students are right now—made me feel like I already have a good foundation to start my career on,” Jessica Barnard said.

In a time when they may feel more disconnected than ever, it was encouraging for students to see a supportive community of writing professionals who are excited to see them enter the working world and start their careers as writers.

How to Conquer Your Email Writing Anxiety

From the Classroom to the Workplace: Recent Alum Shares Job-hunting Tips

Are Business Cards a Thing of the Past?